“I have learned that it is far easier to write a speech about good advertising than it is to write a good ad.” — Leo Burnett

And it’s also far easier to show great ads and examine what made them work than it is to create them. And, in fact, as time goes on — it gets harder. We’re the first generation that has a recorded history of our entire timeline, with the resulting challenge being that every new thing — be that a song, a movie, a book, or an ad — is not just competing against all the other new things … but every new thing is also competing against every thing that has been created and recorded in the last 50 years. That’s a tall order.

One modern campaign that feels like it could stand shoulder-to-shoulder with the giants is the Dos Equis “I don’t always drink beer, but when I do, I prefer Dos Equis,” and “Stay thirsty, my friends” campaign. Usually called “The Most Interesting Man In The World” campaign, it was created by the global marketing firm Euro RSCG Worldwide. The ads star American actor Jonathan Goldsmith as “the most interesting man” with narration by Will Lyman, best known for his narrating role in the public affairs TV program Frontline.

The ads first aired in the United States in 2006 and were uploaded to the wistl1976 YouTube channel on April 10th, 2007. The same month, the promotional website StayThirstyMyFriends.com was launched (URL registration expired, now a Japanese cat site), where fans could upload videos of themselves performing toasts with a bottle of Dos Equis.

The best part of the campaign is the endless set of memes inspired by it, which are the “Most Interesting Man in the World” photo with captions typically follow the phrasal template “I don’t always X, but when I do, I Y.” For example: 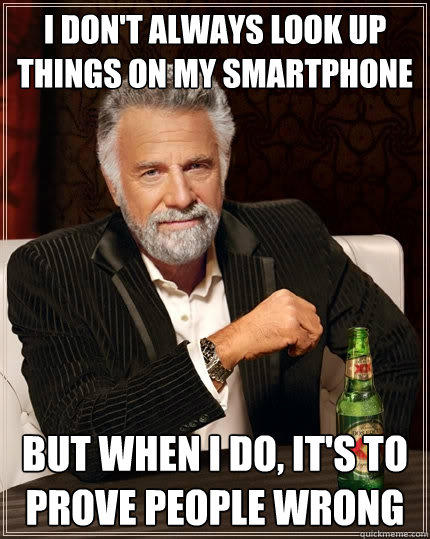 The greatest thing about this campaign is that they are somehow resisting the urge (and usual boardroom fatigue) to mess with it, and have stayed true to the format for almost a decade. Very few brands have managed to do this — the Maytag Repairman stands out as a lone survivor of advertising consistency over decades — and I applaud the agency for letting the forest continue to grow. I still get a twinge thinking of the loss of the Absolut Vodka campaign, to be replaced by whatever nonsense they are running now. One of the great campaigns of the late 20th century, cut down for ego.

[Many advertisers] are engaged in the business of cutting down their own trees. Some of these trees are hacked down as mere saplings. Some are chopped down just as they begin to grow straight and strong and tall. And sometimes we witness one of the most senseless things in the advertising business: A new management brings crashing to earth one of the giants of the forest, apparently for no other reason than a desire to rearrange the advertising landscape.

At this point we hear a quiet voice asking: “Yes, but when a campaign gets very high penetration, when almost everybody in the country knows it, does it not then begin to wear itself out?”

The answer, of course, is still “No”. Penetration statistics prove this. For if the campaign wore itself out, one of two things would happen: penetration would drop, and the public would cease to respond to the message, and usage pull would fall.

We have never seen such a thing happen, unless the product itself suddenly becomes outmoded. Instead, the campaign continues to flourish, like a great tree spreading its branches and reaching for the sun. And year after year, rich and fruitful seeds continue to sift down to the earth, in new sales and customers.

So let your tree reach for the sun! In fact, clear away the advertising underbrush and give it a chance to grow and breathe. You can own a towering giant, with its roots deep in the earth, safe against even the most raging advertising storms.

Here’s a great compilation reel of the Dos Equis campaign since 2006: