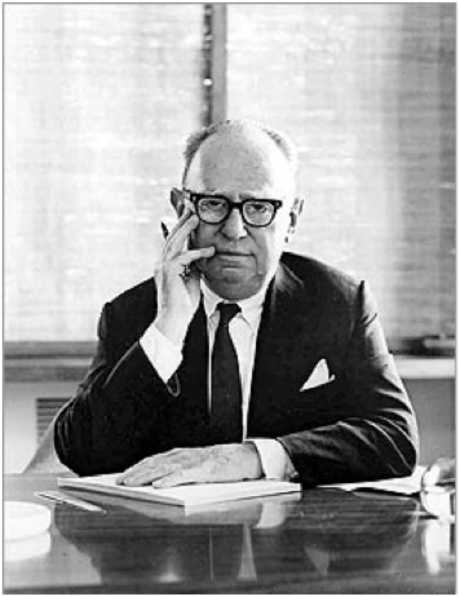 Well, this is exciting … today is the first Sunday of “100 Weeks of Leo Burnett, the Midwestern Master of Mascots”!

One of the most rewarding professional relationships of my career was with @AlisonTintle ‏who is now Creative Director at VML Seattle. Alison is a fantastic CD — whip smart and funny; a student of advertising; and willing to argue a point with the client. For Alison, “client service” means “creating great advertising”, not “doing what the client tells me to do”. I have tremendously valued my relationship with Alison over the years. If you meet a CD like Alison, hold on tight and don’t ever let her go. Great creatives are harder to find that you might think, and creatives who think like sellers are even tougher to find.

Alison gave me a book a couple of years ago called “100 LEO’S — Wit & Wisdom from Leo Burnett“. It’s a collection of 100 quotes from Leo Burnett, one of the Advertising Greats — and a renowned storyteller and collector of sayings. He used to keep a box in his desk, and whenever he’d hear a great language idiom he’d write it down and stick it in his box — not dissimilar from what musical theatre writers do with their “trunks”. There is a great NTC Business Book called “The Art of Writing Advertising” that features Ad Age interviews by Denis Higgins of five Masters of the Craft — William Bernbach; Leo Burnett; George Gribbin; David Ogilvy; and Rosser Reeves. We’ll talk about all these giants over time — but there’s a great quote from David Ogilvy in this book about Leo Burnett:

In answer to the question: “What about the use of vernacular in copywriting? The “Winston Tastes Good Like a Cigarette Should.” That kind of usage.”

David Ogilvy responds: “For some reason or other, I never studied English grammar in school. I don’t know the rules of grammar. And I keep on hearing people talk about that phrase, “Winston tastes good,” as wrong grammar. But I don’t know why. It sounds all right to me. And it seems to me that people who see something wrong with that are insufferable pedants. But perhaps I’m just saying that they are grammarians and I am not.

If you’re trying to persuade people to do something, or buy something, it seems to me you should use their language, the language they use every day, the language in which they think. We try to write in the vernacular. Leo Burnett is very good at this. Somebody told me he has a box on his desk in which he put vernacular phrases every time he comes across one. I’m not very good at this because I’m a foreigner, and I’ve never had much mastery of American vernacular. And whenever I try it I fall flat on my face. but I do admire it in other people, the ability to write as one human being talks to another, and that means vernacular.

It was from this practice that great idiomatic but non-grammatical advertising selling lines were born — like “Winston Tastes Good Like a Cigarette Should“. While not a Leo Burnett campaign, the classic Apple “Think Different” campaign draws from the same school of advertising thought, over the protests and howls of grammarians everywhere: Link.

This gift from Alison inspired me to start an “Advertising Greats” series, to continue on a relatively unbroken basis for an indefinite run. Advertising History is one of my great passions, and I’m not spending enough time on it here on Copernican Shift. To kick it off, I’m starting with “100 Weeks of Leo”, where i will share a new Leo Burnett quote every Sunday. Fun, right?

So first, a brief introduction to Mr Leo Burnett from the Introduction in “100 LEO’S”:

Born October 21, 1891, in St. Johns, Michigan, Leo Burnett gained his first exposure to advertising layout and copy at his father’s dry goods store. In 1914, he graduated from the University of Michigan with a degree in journalism and landed a job earning $18 a week as a reporter at the Peoria (Ill.) Journal.

Burnett went on to become advertising manager for the Detroit-based Cadillac Motor Company and creative head at the Homer McKee Company, Indianapolis’ leading ad agency, before moving to Chicago and assuming the position of creative vice president for Erwin Wasey advertising agency.

Borrowing against his life insurance policy, mortgaging his home, and scraping together “every cent and pants button” he could find, on August 5, 1935, the 44-year-old entrepreneur founded Leo Burnett Company, Inc., the first office being a suite in Chicago’s Palmer House hotel.

With the firm belief that “the work of an advertising agency is warmly and immediately human and deals with human needs, wants, dreams and hopes,” Burnett set out to create that kind of advertising. And did. Working hard and long hours — often beginning his days at 5 a.m. — his capacity for endless labor inspired those whom he employed.

“Leo had that ability, like a good athletic coach has, of making you do better than you thought you could,” recalled his wife, Naomi. “In pleasing him, you were pleased with yourself. He somehow improved everything he touched, with either his black pencil or by his example. He had infinite patience.”

Through 36 years under its spirited founder — the last four of which he assumed the title of founder chairman — the Leo Burnett Company created some of history’s most enduring advertising campaigns, ranging from the Marlboro Cowboy to Kellogg’s Tony the Tiger to the “Friendly Skies” of United Airlines to the Jolly Green Giant, among others. Although Burnett died in 1971, his original corporate mission to “Create the best advertising in the world — bar none” today continues to motivate more than 8,000 intensely loyal Burnetters in more than 80 offices worldwide.

And here’s this Sunday’s Leo (my all-time favorite):

“When you reach for the stars you may not quite get one, but you won’t come up with a handful of mud either.” — Leo Burnett