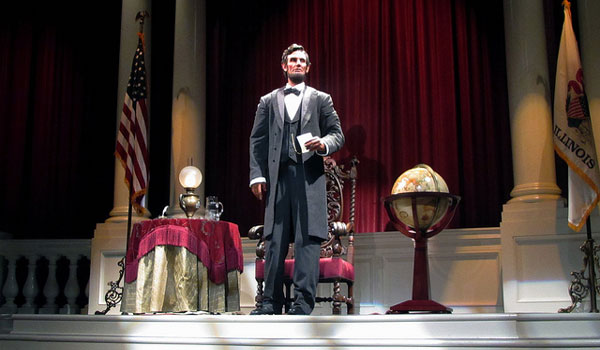 Walt let a small frown cross his face. His mustache twitched slightly, a nervous tic that resulted when he moved his jaw rapidly from left to right. Walt’s brow furrowed again — his eyebrows moved about half an inch closer to each other as his eyes narrowed to a squint. Walt leaned forward to look at the robot’s shirt front.

Standing slightly to the robot’s left; Walt reached forward with one hand to touch the shirt fabric with his fingertips. He let his fingers walk across the thick white cotton to trace the size of the wet spot. Walt then ran his index finger across the edges of the grey wool vest. The edge of the vest seemed dry. It was just the front of the shirt that was moist, and it wasn’t exactly soaked. It was … damp.

Walt did a full circle around the sitting figure, and ended up back in front of the robot, but adjacent to the opposite leg. Walt leaned over again and returned to his gentle tracing of the moisture spot, this time with his right hand. The wetness seemed to start about a hands-length below the robot’s chin, and it stopped just above the vest line.

“Could it be a leaking pipe?” Walt thought, “Or is it a broken line?”

Walt stood back and put both his hands on the robot’s shoulders, and then smoothed the black broadcloth suit like a practiced tailor, with his hands tracing a pattern from the shoulders and then down both arms. The jacket was dry. Stepping around the back of the robot again, Walt made small circular motions on the back of the suit jacket. Also dry as a bone. Walt knelt gently beside the robot’s left hand.

“My apologies, Mr President,” Walt smiled, “But I am your tailor today…”

“Ah, that will be all the kneeling I’ll do for today,” Walt commented ruefully.

Walt peered into the robot’s cold eyes. The robot’s eyes were wet too. Traces of moisture could be seen on both of the robot’s cheeks.

“Mr President,” Walt exclaimed, sotto voce — “How in the name of heaven did you get water all over you? Why is your face wet? Are you leaking?”

Walt stood back and scratched his head.

“What would be leaking from your face? There isn’t a hydraulic line near your eyes. What is this stuff?”

Walt pulled out an old handkerchief with the initials “WED” still bravely hanging onto corner of the worn cotton square. Walt reached out with his right hand to lightly pad the water from the cheeks of the robot. Carefully re-folding the handkerchief, Walt put it back into his left-front suit jacket pocket. Stepping back, Walt looked at the robot.

“Now children, here we have a real mystery,” Walt muttered. “I have an Audio Animatronic President Lincoln that is nailed to the floor, with a perfectly dry suit and a wet face and shirt front. I’m standing in a dry theater, and I am alone. I did not throw a glass of salt water in Mr Lincoln’s face. If I didn’t know any better, I would say that the President has been crying. Fortunately, I know better.”

“Now, where is that water coming from?” Walt murmured, as he put his hands on his hips.

Walt decided to stand back from the robot and survey the set. He looked to his left at the small draped table. Walt reached out and touched the polyester. It was dry.

Walt then turned to the old-world style floor-mounted globe. As he walked by the robot, he kept his eyes on the sitting figure, in case a random drip would reveal itself. No luck. Walt put out his right hand and gently spun the globe — it was dry as well.

“Heck, even the oceans are dry,” chuckled Walt.

As far as Walt could tell, the moisture was on the robot alone. Walt walked down the three steps from the stage set to the footlights, taking each step slowly, and a little out of cadence, with each knee breaking spasmodically and then landing on the opposite straight leg. Walt rolled his eyes — he walked like a wind-up toy these days. He threw out his left arm and rotated his wrist so that he could see his watch in one smooth motion. 9:30am.

When Walt got to the bottom step he looked around the room. Walt looked up –- no visible leaks. Continuing to look up, Walt leaned from side-to-side to catch the ceiling above both sides of the set. Nothing.

Walt turned completely around to look into the empty audience. Walt froze. How could “Great Moments with Mr Lincoln” be empty at 9:30 in the morning? The Park opens at 9:00am. In mid-December, the Park should be packed by now…

“What day is today?” Walt stepped back slightly at the sound of his voice to the empty theater. “Think old man, think…”

Ah yes, it was December 15. It was Thursday. And then, Walt remembered. He remembered everything. He knew why he was standing in “Great Moments with Mr Lincoln” at 9:30 on a Thursday morning. He knew why he was here. Walt’s shoulders relaxed and he turned back to the robot. He brushed off his jacket sleeves and straightened the bottom of his jacket.

Then, he said, “Mr President, I believe it is you who once said ‘…when you reach the end of your rope, tie a knot and hang on…’ Well, I’m going to hang on for a few more minutes.”

Walt walked back up the stairs of the set, with a new spring in his step. Walt went to Mr Lincoln and straightened Abe’s tie.

Walt turned to face the empty seats of the theater. Walt slowly filled his lung and looked at the Grecian columns inset with red velvet. He soaked in the row upon row of red-upholstered theater seats in front of him.

Walt leaned over to the robot and said, conspiratorially: “Would you mind if I spoke to the kids one last time?”

Walt thought he might have noticed an imperceptible nod, so he took his cue: “Eleven years ago I opened Disneyland with these words: To all who come to this happy place; welcome. Disneyland is your land. Here age relives fond memories of the past … and here youth may savor the challenge and promise of the future. Disneyland is dedicated to the ideals, the dreams and the hard facts that have created America … with the hope that it will be a source of joy and inspiration to all the world.”

Walt nodded to the robot. “How am I doing so far, Abe?”

Walt thought he saw a slight smile on the robot’s face, so he turned back to the empty auditorium. “And when people ask me why we built ‘Great Moments with Mr Lincoln’, I respond that here is a man who sacrificed everything for the ideals, the dreams, and the hard facts that created America. A man who once said that the ‘bulwark of our liberty and independence lies in our love of liberty, and that our defense against tyranny lies in the preservation of the spirit which prizes liberty as the heritage of all men, in all lands everywhere.’ Ladies and gentlemen, boys and girls — Mr Lincoln is in Disneyland because without Mr Lincoln there would never have been a Disneyland.”

Behind Walt, a river of tears flowed from the robot’s eyes, and the tears coursed down the robot’s cheeks. Walt gave a short bow to the empty auditorium and turned around to look at the weeping robot.

With his head slightly inclined, Walt said, “I’ll have you know Mr President, that crying is not allowed in the Oval Office.” Walt paused. “Also, this is The Happiest Place on Earth — it’s a matter of policy that there’s no crying in Disneyland.”

A smile crinkled Walt’s face. Leaning closer to the robot’s face, Walt looked deeply into its eyes. “Y’know, Mr President … next to Small World, you were my favorite.”

Walt brought out his handkerchief again, and wiped the cheeks of the robot one last time. Walt gently patted the robot on the shoulder, and then turned to walk down the stairs of the set. This time, he almost bounded down the shallow white curved staircase, and then with a youthful “Hup!” he jumped off the edge of the stage to land lightly in front of the first row of seats. Without turning, Walt slowly walked toward the door of the theater, and as he did the robot’s eyes turned to follow him.

When Walt cracked the theater door open, a bright white light curled around the edges of the doorjamb, and then enveloped Walt as he fully opened the door.

Walt turned, and with a big smile he said, “Keep up the good work, Abe.” Then, with a quick nod of his head, Walt turned back and walked into the light, and the door shut behind him with a slow whoosh.

Tears cascaded down the robot’s cheeks, and dripped off his beard onto his shirt. He would miss being Walt’s second favorite. But, what bothered the robot the most was: In the end, the robot felt nothing. He wasn’t programmed to.

This work is licensed under a Creative Commons Attribution-Noncommercial-Share Alike 3.0 License.