“I believe that superior creative work always has been, is, and always will be the hub of the wheel in any successful agency.” — Leo Burnett

The campaign which put David Ogilvy on the map was for Rolls-Royce from 1958 to 1962. This super famous campaign stated: “At 60 miles an hour the loudest noise in this new Rolls-Royce comes from the electric clock.” 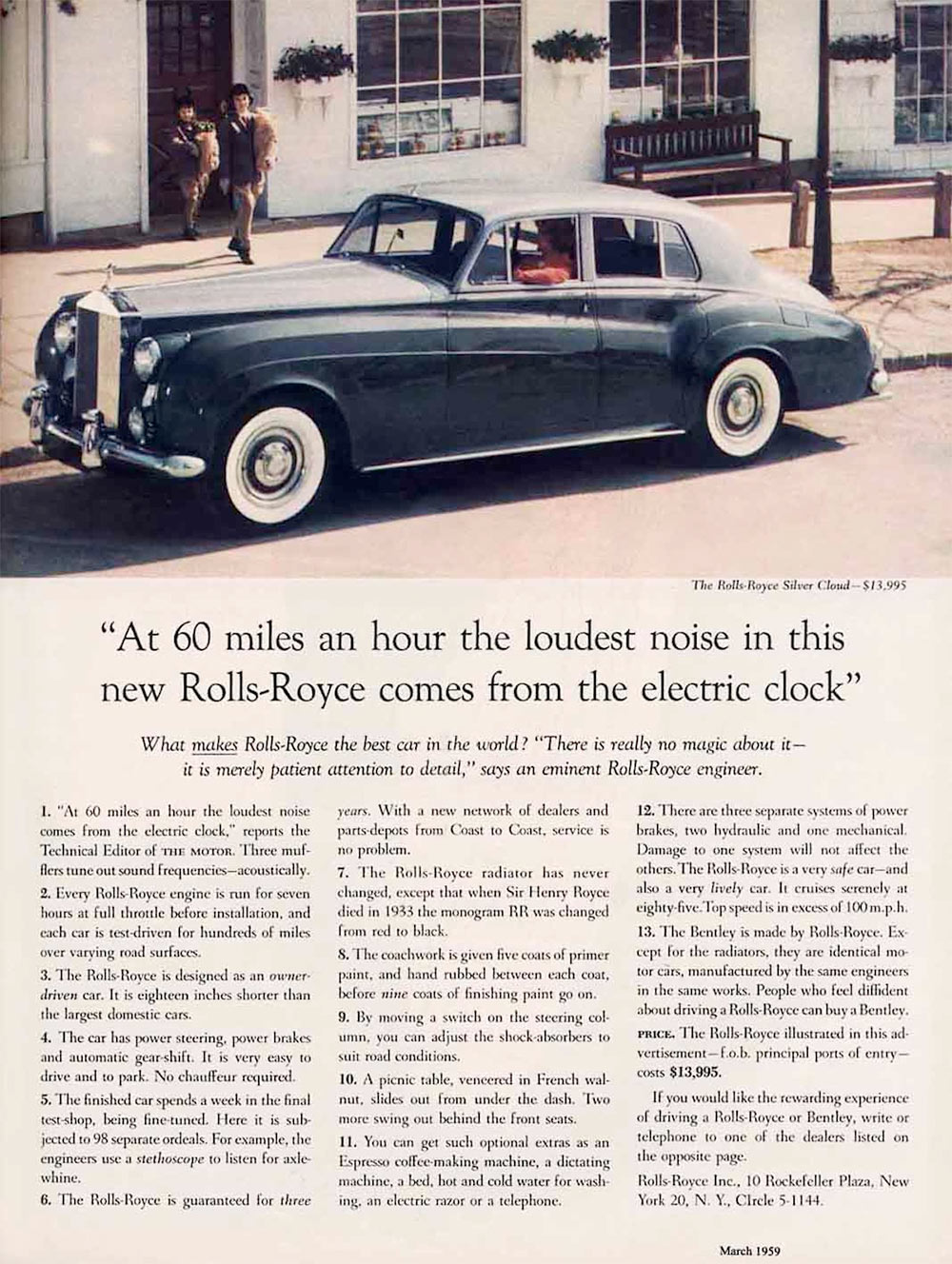 There’s a fantastic round-up of this campaign at Swipe-Worthy: Link. They’ve got a great archive of ads from the campaign, and a really fantastic “11 Big Takeaways:”

11 Big Takeaways from This Campaign

Takeaway #2: He conducted research for 3 weeks.
Lesson: All you have to do is look at the incredibly specific & meticulously stated facts to realize that Ogilvy learned every detail he could about the car to set himself up for a brilliant ad campaign. He knew that deep research is what leads to a killer big idea. It’s worth noting that before working with Rolls-Royce, he had zero experience with automobile sales.

Takeaway #3: He wrote out & presented 26 different headlines to Rolls-Royce.
Lesson: This was common & possibly even on the lower end for a typical Ogilvy campaign. Today, many companies including popular blog Upworthy attest to writing out & testing at least 25 headlines per post.

Takeaway #4: He quoted reviews from automobile magazines in almost every ad.
Lesson: Just like how modern-day copywriters reference Amazon reviews for copy inspiration, Ogilvy utilized reviews written about the Rolls-Royce, but from print editorials. In several ads, he incorporated quotes into the subheads or bolded them within the body copy so they stood out. He always cited the name of the magazine, which gave credibility to the quote.

Takeaway #5: He knew how to swipe & use inspiration.
Lesson: Ogilvy’s most famous headline “At 60 miles an hour the loudest noise in this new Rolls-Royce comes from the electric clock” was directly swiped from a quote he read in a British motor magazine. He openly admits he didn’t write it: Link. On top of that, an ad from 25 years earlier for automobile brand Pierce & Arrow used an almost identical headline, “The only sound one can hear in the new Pierce Arrows is the ticking of the electric clock”. Charles Brower of BBDO, the agency behind the 1933 ad, wrote to Ogilvy about it, but Ogilvy stuck to his story & insisted his inspiration came from the magazine article.

Takeaway #6: Rolls-Royce’s budget was a measly $50,000, “less than two percent of the Cadillac budget”, as Ogilvy pointed out.
Lesson: Even though the budget was small, Ogilvy gave it everything he had & ended up paving the way for a number of big accounts like Shell Oil, who hired him because of his work with Rolls-Royce.

Takeaway #7: Once he didn’t believe in the product, he stopped working with them.
Lesson: This is one of my favorite takeaways from this campaign & a signifier of how Ogilvy’s worked. He saw their quality go downhill, screwing up new features like air conditioning & automatic shifting so he wrote them a letter about why he no longer wanted in. He was surprised when they didn’t take any offense. The head of Rolls Royce, who was an engineer, wrote back saying “I don’t blame you at all. I think you have a point”. Ogilvy actually owned a Rolls-Royce, but it was a pre-owned 1932-1933 model.

Takeaway #9: In every ad, he followed a go-to structure of putting a large attractive photo of the car, a headline and long copy in a 3-column format. This went against typical automobile advertising & it worked.

Takeaway #10: He used a variety of different headlines & angles with different appeal, even though the body copy was mostly the same.
Lesson: This way the ads always seemed fresh & he could test out what had the most impact.

Takeaway #11: He focused strictly on the facts & unlike most automobile ads, used lots of copy.
Lesson: “When I advertised Rolls-Royce, I gave the facts – no hot air, no adjectives, no gracious living… In my first Rolls-Royce advertisement, I used 719 words, piling one fascinating fact on another…. Judging from the number of motorists who picked up the word “diffident” and bandied it about, I concluded that the advertisement was thoroughly read. In the next one I used 1400 words.”

The campaign was so famous it inspired numerous copycats and comparison campaigns. Here’s one of my favorites from Ford — but bear in mind that while these are fun to do and fun to read, because of mis-attribution by consumers you should really avoid — at all costs — the temptation to copy and make fun of your competitors using their own creative … it’s just adds to their media weight and overall brand impression: 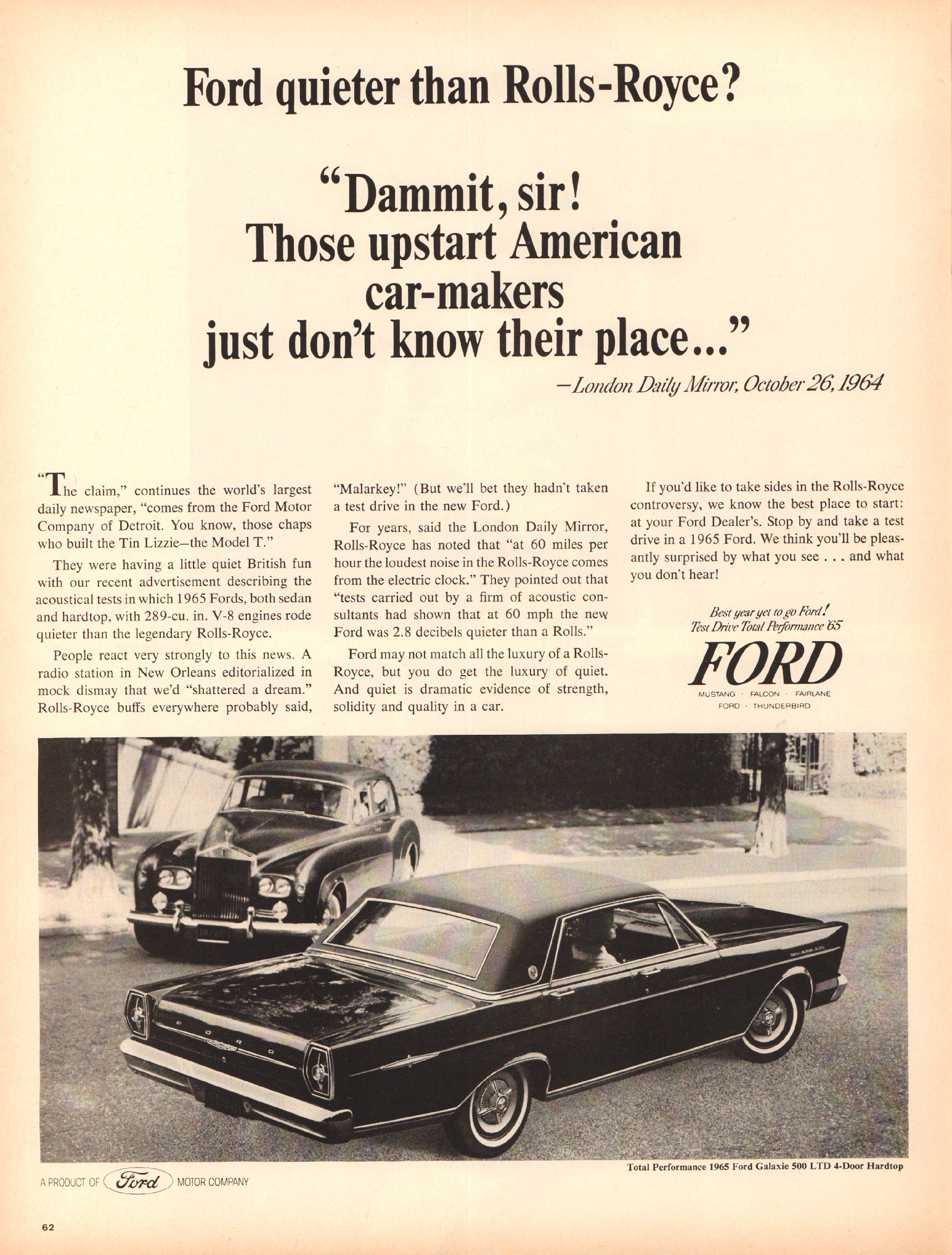 In Ogilvy on Advertising, David’s seminal work on advertising best practices, he relates the story of a Rolls-Royce engineer who upon reading the classic ad said, “We really should do something about that clock…”

Need more Ogilvy? Here’s a great round-up of 7 Commandments from the giant himself: Link