My favorite toy growing up — and one of my favorites still — are Zeroids from the Ideal Toy Company: Link

My brother and I each had our own Zeroids. Mine was Zerak, leader of the robots, while my brother had Zobor, although his has long-since been destroyed. I was able to preserve my Zerak in played-with but near mint condition … and I have gone on to buy dozens of Zeroids since, including their Action Set and several Solar Cycles. I’ve also grabbed dozens and dozens of mint Motorific motors, which tend to die over time and can be used to power not only the Zeroids but also the Motorific slot cars and Boaterific line of toys.

There are some great pics and history of Zeroids on ZeroidZ.com: Link

The Zeroids were a line of toy robots from the Planet Zero introduced by the Ideal Toy Company in 1967. Consisting of Zerak, Zintar and Zobor, the Zeroids powered their way into the imaginations of young boys for nearly a decade. Zeroid robots were powered by a small DC electric motor that could be removed. These DC motors appeared as the brand name “Motorific” in Ideal Corp racing slot cars, and “Boaterific” powered scale motorboats.

The original sales pitch read, “Moving across the landscape, overrunning all obstacles as inexorably as the Future itself, these amazing, efficient and powerful automatons have but one purpose – to serve their masters at work and play!”

The storage cases in which the robots came could be used for other purposes. The robots were battery operated, and had wheels with rubber treads to propel themselves across the floor. There was a bottom mounted reversing switch that would allow the robot to reverse when it touched a special plastic plate, or turn the robot off, when in backed up into its display case.

Zerak, the blue robot, was originally the “commander” of the three robots. Zerak came with hook hands, and interchangeable magnetic hand and a throwing cup hand. Zerak’s right arm could be cocked, and made to throw objects.

Zobor, the “Bronze” Robot, could “transport” lightweight items in his storage case, which could be “transformed” into a wagon due to having wheels attached to it. The case/wagon could be latched to a hook on Zobor’s base. Zobor had a throwing arm and special spring-loaded plier type clamp hands.

Zintar, the silver “explorer”, could use his storage case as a sled-like vehicle, which was propelled by his own treads. Zintar had a throwing arm and special hands with spring-loaded opposable thumbs. Zintar was cast in both a silver sparkled plastic and also in plain light gray plastic.

Later, “Zogg”, a green robot was added to the set, and replaced Zerak as the commander of the zeroids. Zogg had powered drive treds, and was the first zeroid with an internal light bulb. Zogg did not have a throwing arm. Zogg had a sophisticated-looking “station” which had movable parts, activated by Zogg’s metal “hands” completing an electric circuit. The station had, among other things, a “radar” that would rotate, and a spiral design ‘monitor” which would spin when Zogg would complete the electric circuit.

An “Action Set” was available with a Missile Defense Pad, launching station, and included a “Solar Cycle” hollow wheel, into which the zeroid robot could be set inside. 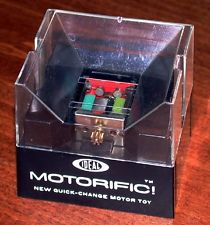 Now, imagine if you had the ability to 3D-print different toy parts that interacted with modules like the Motorific motor? Snapping these ToyBots into different configurations, and allowing them to function differently based on how they were connected together. That’d be cool, wouldn’t it 🙂