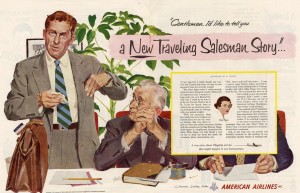 The Web as a Door-to-Door Salesman articles (I, II, III) were from an interview I did a decade ago. Although some of the examples are now extinct, a lot of this is still super relevant today … in some ways more than ever.

Grad Conn, vice president and managing director of Grey Worldwide Canada, sees the Web’s next marketing evolution happening in online communities, like blogs. They push interactive advertising toward an interpersonal communication model with a heavy emphasis on relationships — especially in the consumer packaged goods (CPG) vertical. Conn, who spoke at February’s iMedia Brand Summit, says marketers, even the ones who are at the forefront of this movement, are still wrestling with this sea change because it combines age-old word-of-mouth with a new set of tools that accelerate communication and cost efficiency.

iMediaConnection: Is there a term for this relationship phenomenon?

Conn: There are a number of different terms floating around. I’d say the most common ones are “targeted media” and “targeted measurable media.” But the reason why no one has really come out with a word for it yet is because it’s essentially old-fashioned direct marketing. Now, for the first time, good marketers have a cost-efficient way of doing this.

I worked at Procter &Gamble in the ’80s and ’90s, and we were always talking about direct marketing — that it’d be so great if we could talk directly to consumers, but the cost of simply putting a stamp on an envelope is prohibitive. Now with the Web, suddenly it costs marginal fractions of a cent to send out something that cost many cents before. Now we can communicate with consumers. So in a way, I am not a huge fan for coming up with a new label because I think ultimately any medium that’s measurable will evolve into a direct medium, and they’re built the same way.

iMediaConnection: Can you tell me what you mean when you say the global communication model is changing from “broadcast” to “re-broadcast”?

Conn: There is no question we’re living in a time of overwhelming media saturation. There’s a creative marketing company in England called Cunning Stunts, and it has a group of students who will sell their foreheads so you can put your brand on their foreheads. Right now, virtually every surface of every thing is covered with a branding message. TV, the Web, everything is plastered with it.

So the way people deal with that information overload — this explosion of messages directed at them — is they can’t track the advertisers the same way they used to. Not that they shouldn’t, but because they can’t. Your brain won’t allow you to. There’s too much information coming at you. So you have to rely on people whom you trust.

iMediaConnection: Who are these “re-broadcasters”?

Conn: The people you trust are your friends, your family, experts who are viewed as being not captured by the media, potentially some news people. So you’re narrowing the field of people you trust to a smaller, select group — for whatever reason you trust what they say. What’s happening is the really smart marketers are creating messages that people will rebroadcast. People will say, “Hey, this is interesting, look what I just saw.” The rebroadcasting adds credibility.

Blogs are a classic rebroadcasting model. You have 7 million people now who are essentially rebroadcasting links they think are interesting. A link enters the blogsphere, and it whips through really quickly — you’ll see it everywhere. It’s because there’s credibility attached to that link as it whips through, and people add credibility, too. This is a terrific network that didn’t really exist five years ago, and didn’t exist at all 10 years ago.

The old network is the backyard fence: talking to your neighbors and friends. Those messages spread very slowly. Word-of-mouth just wasn’t something that marketers looked at as a credible medium because it’s too slow. Now you have a global network where messages are passed quickly in the same way. It’s still word-of-mouth between peers, but it’s moving faster. Suddenly we’ve got a real medium we can use for marketing, and a lot of people are doing it.