The Web as a Door-to-Door Salesman articles (I, II, III) were from an interview I did a decade ago. Although some of the examples are now extinct, a lot of this is still super relevant today … in some ways more than ever.

Grad Conn, vice president and managing director of Grey Worldwide Canada, sees the Web’s next marketing evolution happening in online communities, like blogs. They push interactive advertising toward an interpersonal communication model with a heavy emphasis on relationships — especially in the consumer packaged goods (CPG) vertical. In part one and part two, he discussed how online communities are changing tactics, and about the critical role of “influencers” in successful online marketing.

iMediaConnection: How will the new media affect so-called “traditional” online media, like banners or email? 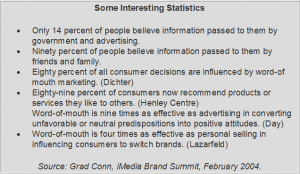 Conn: Traditional online media is not going to go away; it’ll be there along with everything else. I think the biggest impact is that traditional online media will evolve into a more direct model, where it’ll be all cost per acquisition, so selling banners on a cost-per-impression basis will disappear. About 40 percent of all media in the United States is now sold on a CPA basis, and it’s rising rapidly. Because you can measure it, it will turn into a direct medium in the next five years, and you probably won’t even see CPM deals except in rare circumstances.

In a world where everyone is measuring the impact of their media, and everyone is measuring the cost of acquiring customers, what will happen is the media itself will become measured as well. It’s inevitable. For example, at Grey we don’t buy CPM media anymore. It’s not necessary. There are enough CPA deals out there that we don’t need to buy CPM deals. I can’t believe we’re the only guys doing that — lots of people must be thinking the same way.

iMediaConnection: Is there any other ad format in history that is analogous to this new model? What would you compare this to?

What happened is that advertising took the place of what used to be door-to-door salesmen. The problem is that most brands never really got to that level of personal attraction and consumer trust — it never recreated that vanity. So relationship media is basically recreating a virtual door-to-door sales model, where you now have people interacting in a more compelling fashion, getting a lot more information, referring their friends to it, getting advice, getting a more enriching experience than they would have without it.

That’s why I don’t think mass media will disappear, but the door-to-door element is what we’ve been missing, and that’s why it’s so exciting to get it back.

iMediaConnection: What do marketers and publishers need to do in this changing landscape?

Conn: There are marketers, like Masterfoods, Coke and Reebok, who are way in front of this stuff, so they don’t need to do anything but to keep doing what they’re doing, which is continuing to learn and try a lot of really cool stuff.

But I’d say there are more marketers that are not doing as much, and I run into this surprisingly often. There are a lot of people I meet at conferences who say, “That blog thing, I’ve never heard of that before.” To me, if I have one criticism for marketers, there are too many out there that let themselves get behind and not stay up with what’s going on out there. They have a tendency to say, “Well, that’s marginal today, so I’m not going to pay attention to it.”

The problem is that something that’s marginal today can be a phenomenon tomorrow. It’s important to understand what you can do with it for your business now, so when it does become a phenomenon, you’re ready to go. Stay up to speed with what the kids are doing — not just by reading research reports, but by actually being online and doing these things.

On the publishing side, I think publishers face a real challenge. They cling to the CPM-based model and are not really adopting or embracing the relationship marketing paradigm the same way. The challenge is that publishers need to think less about eyeballs, and talk more about relationships. They obviously need to think about those relationships in a cost-per-acquisition way, and they need to think about relationships in a way that is consumer-centric and measurable. But right now they allow way too many eyeballs to hit the page and bounce off. I shouldn’t be buying an ad on CNN, for example — I should be engaging in a relationship with the consumer on the CNN network. Publishers have squandered fantastic opportunities to create social networks around their content.

There are a few publishers that are doing cool things, like Tickle, which was formerly Emode.com; they do personality tests, and they turned themselves into a social network. Those guys completely nailed the model of the future and they’re right on top of it. There are a few companies that know what they’re doing and doing it well. But the really big ones are way too conservative. What they need to focus on is how to take the consumers they have and turn them into relationships in that market.

Quite frankly, marketers are building networks, but it’s a lot of work. It’d be nice if we could be engaged in a consumer interaction that already exists, so that we don’t have to create it from scratch every single time. No one has provided the opportunity for packaged goods companies to do it any other way. That was a theme in my speech last month: a kind of “Wake up, guys — do you understand what’s being created under your noses here?”

A couple of my major clients don’t need to buy online media anymore. They have enough people in the pipe already, so that’s got to worry online publishers.