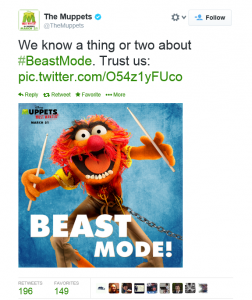 You know you have arrived when The Muppets are talking about you. Seattle Seahawks Marshawn Lynch, aka Beast Mode, is getting more attention than ever – and now The Muppets are getting in on the action. Animal is loud and proud and he shares an uncanny resemblance to #BeastMode: Link

As reported by Screen Crush, Disney joined in on the game day fun by premiering a ‘Muppets Most Wanted‘ Super Bowl trailer, which takes a note from its previous trailers by debuting a sampling of Twitter reviews for similar comedic effect. So, ready to hear what @KevKoast315 has to say about the new movie?

Tina Fey, Ty Burrell and Ricky Gervais join the Muppets crew as the principal human cast, while the film also serves a double dose of Kermit.