Seattle Seahawks fullback Derrick Coleman is deaf, but you’d never know it on the football field. He’s embraced the challenge and perfected the art of lip-reading to succeed in the sport he loves. Coleman (Seattle Seahawks #40) is the first person in the entire history of the NFL, to play offense and be deaf. His journey to the NFL is an inspiring story of perseverance.

When Coleman was a toddler, he was diagnosed with a genetic and incurable hearing impairment. He can’t hear anything without the help of his hearing aids. He was teased and bullied for his differences. But he didn’t allow that to stop him. He learned to lip-read to adapt. And he had a dream to play football.

“Football gave him that sense of belonging and a sense of purpose in life,” said his father, Derrick Coleman, Sr. As a result of his drive, and passion and dedication, Coleman became a standout running back in high school, and then at UCLA.  He learned to make adjustments to manage better on the field. Because of the perception that he couldn’t do it, “he had to work harder, he had to be stronger, and he had to be faster, in order for someone to even pay attention to him,” said his father.

He never gave up and the rest is history. See the inspiring Duracell commercial.

Sherman Smith, Seahawks Running Backs Coach, said “Derrick told me I’m hearing impaired, but it doesn’t have an impact on my ability to learn. His work ethic was outstanding, his toughness, and then I saw his intelligence. We just had to get him on the field to see if we could put it all together.”

He’s now a Seattle Seahawks fullback, and he reads the lips of Russell Wilson to make the plays. 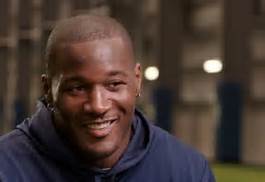 Derrick Coleman Sr. proudly shared, “I admire my son every day. For the perseverance and things it took for him to get to this level.”  “Everything that people told Derrick he could not do, he’s doing. People didn’t think he would be in the NFL. I told Derrick this is not going to be easy. And he would say, mama, when has it ever been easy,” said his mother.

Derrick Coleman is an inspiration to everyone, and every person who has faced challenges in their lives.

Be sure to check out his story: