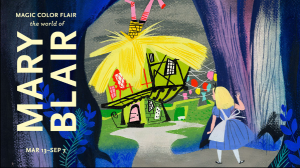 From BoingBoing – Mary Blair is my favorite artist of all time, in a gorgeous retrospective at the amazing The Walt Disney Family Museum in the Presidio in SF:

San Francisco’s Walt Disney Family Museum is running an exhibition on the art of Mary Blair, one of the all-time greats of Disney history and modernist illustration and color. I’ve covered her work here before (for example, there’s a gorgeous collection of Blair’s Golden Books, and, of course, the amazing Alice in Wonderland edition featuring the rejected concept art she produced for Disney’s psychedelic Alice in Wonderland animated film), and I’ve been lucky enough to see some of it in person while I was working at Disney, but this exhibit, called “MAGIC, COLOR, FLAIR: the world of Mary Blair,” looks extraordinary.

MAGIC, COLOR, FLAIR: the world of Mary Blair features some 200 works and explores all phases of Blair’s work by examining her artistic development in three major areas: “Learning the Rules”—her student days at Los Angeles’ legendary Chouinard School of Art, and her fine art regionalist watercolors exhibited in the 1930s. “Breaking the Rules”—her artistic breakthrough with boldly colored, stylized concept paintings for classic Disney animated features during the 1940s and 1950s, including Saludos Amigos (1942) and Peter Pan (1953); and “Creating New Worlds”—freelancing in the 1950s in New York where she became a popular illustrator for national advertisements, magazine articles, clothing designs, window displays, theatrical sets, and children’s books.

The exhibition includes Blair’s rarely exhibited student art, which was influenced by the illustrations of her mentor Pruett Carter, and her mid-to-late artworks from the 1930s as a member of the innovative California Water-Color Society which reveal an essential humanism and empathy for her subjects. The exhibition also showcases The Walt Disney Family Museum’s extensive collection of Blair’s conceptual artworks in gouache and watercolor—some of which have never displayed outside The Walt Disney Studios—that reveal the artist’s inexhaustible creativity in design, staging of imagery, visual appeal, and unique color sensibility. Also featured are original illustrations from several of Blair’s beloved Golden Books including I Can Fly (1951).

An imaginative colorist and designer, Blair helped introduce a modernist style to Walt Disney and his studio, and for nearly 30 years, he touted her inspirational work for his films and theme parks alike. Animator Marc Davis, who put Blair’s exciting use of color on a par with Henri Matisse, recalled, “She brought modern art to Walt in a way that no one else did. He was so excited about her work.”