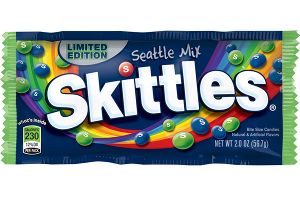 I just read a cool story about Marshawn Lynch’s Mom, who used Skittles “power pellets” as a treat to motivate her shy son and get him pumped up for his games when he was playing Pop Warner football. I did the same thing with my oldest daughter, but it was to motivate her to play the piano. Today – Marshawn is a world-class football player. And my daughter? She’s a world-class musical theatre artist. Wow … what do they put in those Skittles???

Now Lynch is eating Skittles all the way to the bank. On January 28, 2014, Skittles announced their first athlete endorsement deal. According to Forbes, the Marshawn Lynch deal is the new double branding future of sports and products. For the first time, part of its deal includes payment to the player’s child-focused foundation. The incentives are interesting (including $10,000 for every touchdown in the Super Bowl). Read the full Forbes article: Link

I think this is a brilliant marketing move for Skittles – they’re capitalizing on the #1 TV event of the year without paying $4 million for a Super Bowl ad.

For those who want to fully engage, here’s how you can get the Limited Edition Seattle Skittles Mix: Link