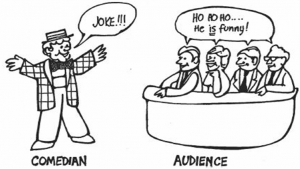 “How do we market to people who have Internet devices in their clothes, even in their bodies?”

So asked Grad Conn, U.S. M&O CMO Lead at Microsoft, in the final keynote to last week’s Internet Marketing Association conference. (Click here to see a short video roundup of the three-day event.) Conn, speaking from the Las Vegas stage that usually hosts “Zarkana” by Cirque du Soleil, told the audience that technology is being built into our lives at such a rapid pace that massive change is inevitable—and marketers better be ready.

“And even more change is coming,” he said, “faster and exponentially. This is a Copernican shift that requires a new perception of reality.”

That shift, of course, postulated the Sun at the center of the Solar System, rather than the Earth. “For marketers,” explained Conn, “this means that the product and brand are no longer the center of the universe—the consumer is.”

Marketing is part of a new, unique digital ecosystem, said Conn, and today’s question is: How do you become part of the consumer’s life?

“The old ‘passive receiver’ model of the consumer is broken,” he stated. “Think about a comedian. A comedian doesn’t come out on stage and say, ‘Hey, look at me, I’m funny.’ He comes out and tells jokes and the audience—the consumer—decides whether or not he’s funny. It’s a stimulus-response, and marketing must do just that—create real conversations with people.”