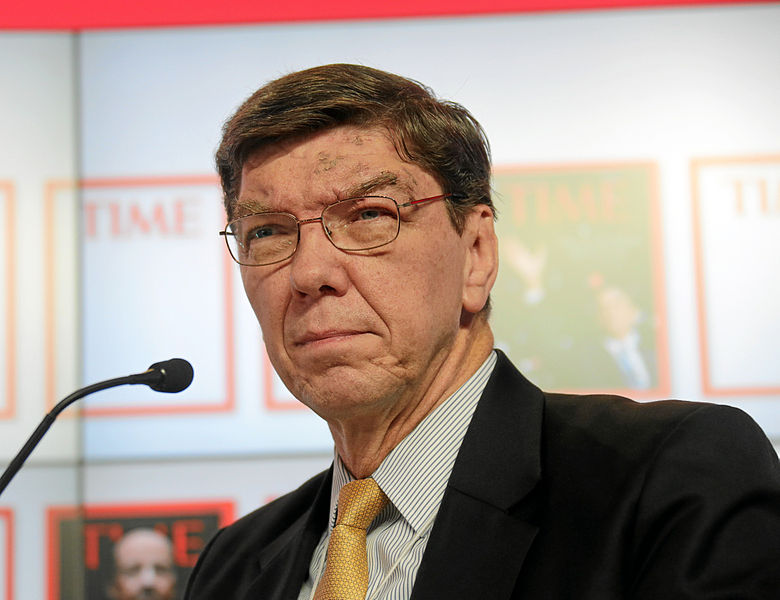 I recently had the privilege of hearing Clayton Christensen, Harvard Business School professor and bestselling author and business consultant, speak at PRISM. He bills himself on his Web site as “The World’s Top Management Thinker”, and it’s hard to disagree: Link

This is a great example of a “Copernican Shift” in thinking.

Why is this a Copernican Shift – and potentially one of the most important shifts in modern management science history? One way to identify a Copernican Shift is to see where someone has had an insight that everyone else has missed. In the case of Professor Christensen, he was able to identify the concept of disruptive innovation where previous management thinkers had generally missed this insight because management science had tended to view the disruptive innovators as new industries … i.e. instant film … versus a new way of delivering the customer benefit … i.e. “family memories”. Why did people characterize new entrants as new industries, versus disruptive innovations in existing industries?

Simply – we tend to view our reality through our lens of observation. From a Copernican standpoint, if you were to stand in a field and observe the motion of the sun, it sure seems like the sun is rotating around the earth. The planet seem stable … flat in fact … and the sun is reliably rising from the east and setting in the west. So, therefore, the observer’s point of view is that the sun rotates around a flat disc which is the earth. Today, we know that reality is different from that perception, and in fact everything is moving super crazy fast:

SPEED OF THE EARTH’S ROTATION
At the equator, the Earth’s surface moves 40,000 kilometers in 24 hours. That is a speed of about 1,040 miles/hour (1670 km/hour or 0.5 km/sec). This is calculated by dividing the circumference of the Earth at the equator (about 24,900 miles or 40,070 km) by the number of hours in a day (24). As you move toward either pole, this speed decreases to almost zero (since the circumference of the spinning circle at the extreme latitudes approaches zero).

SPEED OF THE EARTH’S REVOLUTION AROUND THE SUN
The Earth orbits, on average, 93 million miles (149,600,000 km) from the Sun (this distance is defined as one Astronomical Unit (AU)), taking one year to complete an orbit. The Earth revolves around the Sun at a speed of about 18.5 miles/sec (30 km/sec).

SPEED OF THE SOLAR SYSTEM IN THE MILKY WAY GALAXY
The sun is about 26,000 light-years from the center of the Milky Way Galaxy, which is about 80,000 to 120,000 light-years across (and less than 7,000 light-years thick). We are located on one of its spiral arms, out towards the edge. It takes the sun (and our solar system) roughly 200-250 million years to orbit once around the Milky Way. In this orbit, we (and the rest of the Solar System) are traveling at a velocity of about 155 miles/sec (250 km/sec).

SPEED OF THE MILKY WAY GALAXY IN OUR LOCAL GROUP OF GALAXIES
The Milky way Galaxy is just one galaxy in a group of galaxies called the Local Group. Within the Local Group, the Milky Way Galaxy is moving about 185 miles/sec (300 km/sec).

SPEED OF THE EXPANSION OF THE UNIVERSE
According to NASA’s Spitzer Space Telescope, space itself is expanding at a rate of 46.2 miles per second per megaparsec (a megaparsec is roughly 3 million light-years).

It took Copernicus to help us understand that our perception was different from our reality. It is this matching of perception to reality that is one of the most powerful ways to unlock insights in your business and your life, because our perceptions are so often deeply flawed, or simply completely wrong. Interestingly, it takes humans a long time to accept truth as evidenced by the fact that Geocentrism (the Ptolemaic view of the universe wherein the earth is unmoving and in the center) continues to flourish on the weirdy, crank edge of society: Link

In a company, our “flat field” is the office and all of our co-workers. We tend to define our reality by what we do every day, which is to build our products, talk about our products, and plan for the next version of our products – mostly with each other. Our Ptolemaic view of our universe is a product-centric one, and our customers orbit around us. To the employees of a company, what they build and sell and plan every day is *the most important thing*, because that is the focus of the effort.

The Copernican Shift that Professor Christensen created occurred because he took a customer-centric view of what was happening to industries, versus a product-led view. To do this, Clay created the thought exercise of asking “What Job is the Customer Hiring the Product To Do?”, with the critical concept being that the list of product features is not what is being hired — there is a deeper customer need that is being fulfilled. Previous management thinkers had generally missed this insight because they tended to view the disruptive innovators as new industries … i.e. instant film … versus a new way of delivering the customer benefit … i.e. “family memories”. They were focused on the *product*, not on the *customer*. This is understandable – management science approaches problems from the company’s standpoint because it is the company who hires them as management consultants, so there is a natural perversion of perception. Clay’s industry background prior to entering academia (he didn’t start his PhD until he was 40) was undoubtedly helpful in making his customer-centric shift.

Let me give you a few examples of how asking “What Job is the Customer Hiring the Product To Do?” can change the way you view a product’s function. It is a great way to force you away from being feature-focused, and to instead be function-focused.

Professor Christensen uses the example of a fast food chain that realized their milkshake sales were skyrocketing in the morning. The company was perplexed by this trend, and started to dig in to understand why people were buying milkshakes in the morning. As Professor Christensen asked milkshake buyers why they were purchasing a morning shake, he was able to figure out that the “job” that customers were “hiring” the milkshake to do was to entertain them on a long, boring morning commute, while providing a filling breakfast. Therefore, the fast food chain began to experiment with the milkshake formulation to increase the “entertainment value” (by adding fruit chunks), and to make the milkshakes last even longer (by making them thicker). They also changed the service model by adding a self-serve machine at the front of the store so that customers could quickly grab their shake and get back to their commute.

This new formulation was great for morning sales – but disastrous for afternoon sales. It turns out that people were “hiring milkshakes” to do a different job in the afternoon – they were hiring them to have a post-school de-brief and connection with their children before heading home to make dinner. It turns out that the new thicker formula made the parent-child connection last too long – impacting meal preparation. So, they changed the milkshake formula for the afternoon crowd, making them thinner and faster to drink. Afternoon sales went up again.

As you approach the challenges of each day, keep forcing yourself to switch your perspective and context. It is this process of constantly challenging oneself that unlocks real creativity and innovation.

P.S.: I first ran across Professor Christensen’s work with the book The Innovator’s Prescription, which is a 10-year in-the-making magnum opus on the problems (and recommended solutions) for the U.S. healthcare industry. Even if you’re not in healthcare, I’d highly recommend this book because the lessons and analysis can be applied to many industries. His “Copernican Shift” in this book is that the U.S. healthcare industry has primarily combined two business models – the high cost consultative model (diagnosis) which Clay calls “Solution Shops” and the low-cost production line model (procedures) which Clay calls “Value-adding Process Businesses”. Typically, it’s difficult to combine an inherently high-cost model, consultative model with a high-efficiency, production line model – and the result is poor performance on both models, which pretty much describes our health care system today – high cost with poor outcomes.

Affordable health care, Christensen concludes, “doesn’t come by expecting high end, expensive institutions to become cheap, but by bringing technology to lower cost providers and venues of care, so they can become more capable.” In fact, today’s intuitive medicine is based on trial-and-error, because just a few symptoms such as temperature, pulse, blood pressure, diabetes and hypertension are used to diagnose a great many types of disease and estimate the probability of good outcomes from treatment alternatives. Let’s face it — the human body has a crude “dashboard” of symptoms … it’s like we’re all a bunch of 1975 Ford Galaxies, with an “Engine Check” light and a speedometer. Until the engine stops working.

At the genetic level, however, our bodies can more precisely show what’s wrong. That’s why advancements in molecular diagnostics, imaging technologies and high-bandwidth telecommunications will enable disruptive business models in health care and facilitate a move from intuitive models to empirical medicine and personalized precision medicine.

Clay also believes – and I agree based on my experiences with HealthVault – that the industry’s obsession with wellness programs is mis-directed because “If you develop a product or service that helps people do something more affordably and conveniently, something they’re not trying to do, it just never works. Even if they should do it, if they’re not trying to do it, it never works. A lot of problems with wellness programs: becoming healthy is not a job people try to do until they’re really sick. ”

The runaway success of HealthVault at NewYork-Presbyterian Hospital (more than 100K discharged patients have registered to get their medical data electronically at MyNYP.org) is a great example of the principle that people only get engaged with something when they need to, for example immediately after a health incident. When you’re healthy, you don’t want to think about getting sick. When you’re sick, you want to think about getting healthy – now you’re engaged!