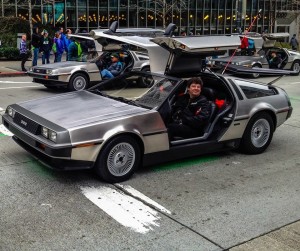 I had a GREAT time on Saturday in the Annual St. Patrick’s Day Parade in Seattle.

An army of Irish-made DeLoreans rolled along the parade route with their doors open as part of the Pacific Northwest DeLorean Club float. Here’s a photo from the Seattle Times — I’m second from the front on the left.

Eleven cars from the Pacific Northwest DeLorean Club (PNDC) gathered in front of the Court House and we joined the parade between Ulster and the Pirates (and their booming cannon).

It’s a particularly fun parade because the crowd is so close and so friendly. We stopped multiple times, and I had the chance to have conversations with lots of people along the parade route. The most common questions were “how fast does it go?”; “do you have a flux capacitor?”; and “what year was your car built?” The answers are of course 88mph; Yes!; and 1981.

I tweeted the set-up: Link 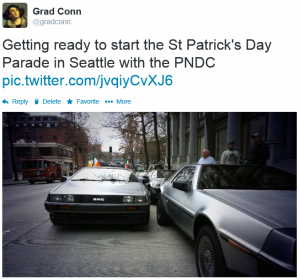 And HLTHVLT was looking sparkling: Link 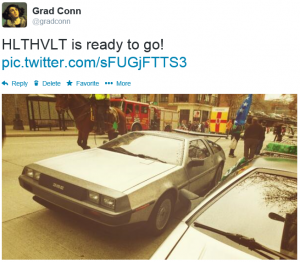 And here I am in the Parade: Link 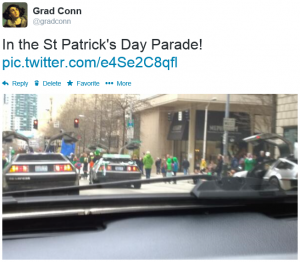 After the Parade we headed over to the Seattle Center for an Irish Car Show in conjunction with the Irish Association celebrations inside the Armory. Since the DeLorean is the only car ever built in Ireland (just outside Belfast), it was an all-DeLorean car show. Most common questions at the car show were “can I touch it?”; “can I sit inside it?” and “can my kids sit inside it?” The answers are of course No; No!; and No!!! 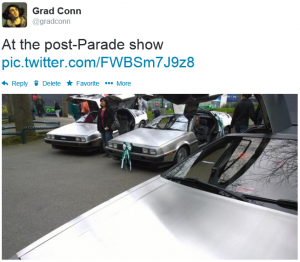 It was great seeing the PNDC gang after a long break, and everyone’s car looked great – especially the green police light bar!