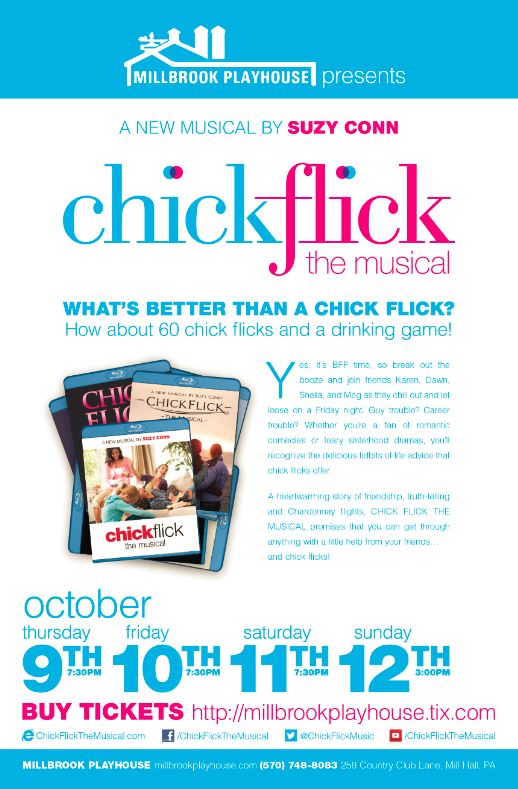 I’m looking forward to seeing the next version of CHICK FLICK THE MUSICAL at the Millbrook Playhouse in Mill Hall, PA.

Running October 9th, 10th, 11th, and 12th; this is the latest workshop edition of the show, but now at a great theatre. Many thanks to Artistic Director David Leidholdt at Millbrook for his support.

You can buy tickets from the Millbrook Playhouse here: Link

Directed once again by Mary Kate Burke — who has been an amazing collaborator with Suzy — this show stars Kendall Chaffee-Standish as Karen Carrington; Whitney Maris Brown as Dawn Demonte; Rachel Joyce as Sheila Black; and Maisie Salinger as Meg Smith.

There are also some very interesting plans around new technology for this show which I’ll talk about as we get closer. Suffice to say, Suzy is experimenting with a “second screen” approach that enables theatregoers to have a social experience that is connected to how they consume media and interact in the real world.

Suzy also has a new blurb for the show, which I like very much because it focuses on the experience that the audience will enjoy:

What’s better than a chick flick? How about 60 chick flicks and a drinking game!

Yes, it’s BFF time, so break out the booze and join friends Karen, Dawn, Sheila, and Meg as they chill out and let loose on a Friday night. Guy trouble? Career trouble? Whether you’re a fan of romantic comedies or teary sisterhood dramas, you’ll recognize the delicious tidbits of life advice that chick flicks offer. A heartwarming story of friendship, truth-telling and Chardonnay flights, CHICK FLICK THE MUSICAL promises that you can get through anything with a little help from your friends … and chick flicks!