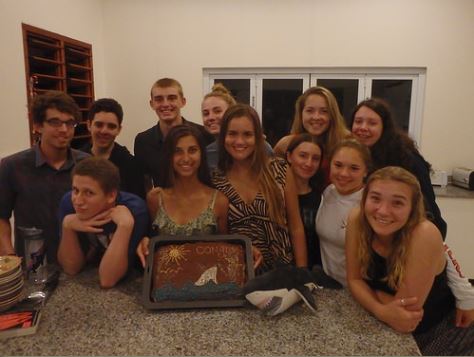 Today’s update from Fiji was co-written by Sofia and Owen:

Bright and early at 7am, we were awoken by the wonderful Lindsay Graff and Austin Seay, who were wearing matching amazing shark shirts. While some of us called home, others ate breakfast out on the porch in the sun. Next, we all excitedly got ready and ventured over to the hotel named “The Pearl” in order to watch the world cup game where the US played Belgium. This beautiful hotel is located right on the beach with the TV at the poolside bar. As the game played in the background, smoothies, iced coffees, and french fries were ordered as we studied and/or intensely followed the game. Towards the end of the game we all intensely watched as the US tried to make a comeback and unfortunately fell behind, much to our disappointment and, from the looks of the other hotel guests faces, our unhappy cheers did not go unnoticed.

From there we went back home and settled down on our individual mats and were handed our midterms. With the birds chirping, the sun shining in through the windows, and the smell of a chocolate cake baking, we completed our tests and sighed a sigh of relief while chowing down on some wonderful Shepards pie, rice, vegetable curry, and BANANAS (much to the delight of our fruit lovers)! As lunch started to disappear, the cards came out and multiple games ensued as we waited for the time to go to Art’s Village. We strolled along the halls of Art’s Village, instantly going to the wifi cafe like moths to a flame. After we were satisfied from checking the time line on Facebook or scrolling through the newsfeed on Instagram, we finally got to spend the rest of the day at the beach!! We attempted to play a game of volleyball and after the ball got stuck in a palm tree, decided it was better to go down to the beach and play in a circle all together where our record was 22 hits. From here we stormed into the ocean splashing and calling the scientific name for Bull shark which is “Carcharhinus Leucas.”

After tiring ourselves out swimming, we decided to get out and dry off watching the sun set over the ocean and the islands Beqa and Yanuca. We then quickly changed for dinner and congregated at our large dinner table, starved after our fun day in the sun. Stories were told, burgers were devoured, and sodas were drained. We finally returned home psyched for the chocolate cake we knew was waiting for us. After taking numerous pictures in front of it, we finally got to eat the first bite of the mouthwatering cake that we had been waiting for all day. What a way to end the day!