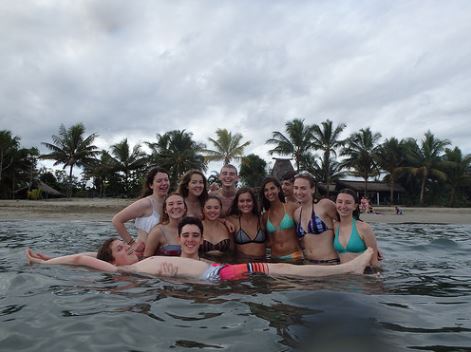 Today’s update from Fiji was co-written by Emmet and Paige:

Winter is coming. We started the day off with a small sleep-in of 7:30am. Everyone grabbed their sulus, cameras, and water bottle in preparation for our community service in the village of Galoa (pronounced “Naloa”). First, we stopped by the dive shop, B.A.D., to pick up two native Galoans, Wasi and Elia. We hopped on our bus dragon and flew to the village, where the village chief greeted us. Everyone was ecstatic and ready to be immersed in the Fijian culture. We ventured around the village, and saw both profound scenes as well as the interesting local life. We walked along a long path intertwining throughout the whole village. Many noticed a stark difference between their community and the one’s we are accustomed to. The houses were very close to each other, with children and other villagers socializing with everyone. The thick communal bonds were evident. Unlike our communities, as we learned from some of the locals, Galoans consider everyone family. After the tour, we headed back to the community center to start our work. We were tasked with painting both the inside and outside.

Painting the walls was hard work, but in the end it was a rewarding experience, especially after realizing the impact we made. A few paint wars occurred, however not as bad as The War on the Wall. Many of us were delighted by the presence of Fijian children who shouted, “Bula” and running away after making eye contact with us. Some true warriors. After we finishing painting, everyone gathered for a traditional kava ceremony. A chief was picked among our group. The verbal ceremony was performed, and the chief proceeded to take the first drink. Three claps before the drink, a “bula!” before the first sip, and then two claps after the kava was finished. The chief then chose the next to drink. Each person had four-coconut cups worth of kava, one for the journey home, and although most thought the branch-taste was unappealing, everyone felt a true sense of being a part of the community. After a quick pic with Babs and some of the villagers, we hopped back in the dragon bus and headed home. When we arrived, lunch was waited for us. Delicious tuna sandwiches, fresh pineapple and papaya and cookies filled our stomachs. We then had a competition of wits in preparation for our midterms. Shark jeopardy was the game and when the question was asked, the first to grab Babs would get the first shot at answering the question. This was competition at its peak with Lindsay Louise Graff greatly amused . Afterward, we all sat down to study even more. A study session was lead by a particularly smart group member, and was extremely successful. We all then felt we needed a study break and played a round or two of cards before Alopiidae started cooking a scrumptious meal of pancakes and French toast for dinner. We all went through our “glums and glows” of the day. We then watched a comedy movie before retiring to our beds for a wonderful night’s sleep. Lots of love to everyone reading, for the night is dark and full of terrors (no actually just used for the reference).