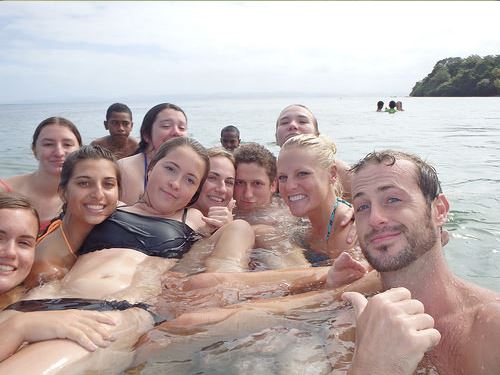 Today’s update from Fiji was co-written by Alena and Kevin:

Waking up early to the sound of roosters, we were all ready for a full day on the island of Beqa. We ate breakfast with our host families, consisting of a wide variety of foods, including French toast, scones, toast, and tea. After breakfast we said goodbye to our families and headed to Papa’s house to meet up with the rest of the group. There we had more food and delicious banana cake. After everyone had their fill, we strapped on our shoes, filled up our water bottles, and put on our backpacks, and headed up the mountain for a hike. We passed by beautiful beaches and smiling villagers as we got to the trail. Hiking up the mountain, we got mud on our shoes and a few bug bites, but it was well worth the picturesque view at the top. The breathtaking sight was of the jungle and mountains of Beqa.

After we all took pictures, we headed back down the mountain and stopped by one of the stunning beaches we had passed before. We spent a lot of time there, playing with the kids, throwing a Frisbee, and swimming in the crystal clear water. The ocean was cold but the sun came out just in time to warm us up after being splashed and dunked in the water. We dried off to tie on our sulus again and walked back to the village for lunch with our host families. We enjoyed sandwiches, rice, dahl soup, and more banana cake while we chatted with our families about our day. There was down time after lunch, so many of us played net ball and volleyball with the children while others relaxed in hammocks, read books, and took naps by the sea wall.

We got to see preparations for the lovo, a traditional Fijian feast, where the food is cooked in a pit in the ground. We watched as the villagers filled the pit with wood and then hot rocks to cook all of the food. Some of us helped shave the coconuts to prepare them to be stuffed with taro leaves, just one part of the delicious dinner to come. They used every part of the plants that they harvested and did not waste anything, including the leaves, stem, and root of the taro. After playing outside and story time with Papa and his friend Ron, it was time to eat the lovo. We gathered in Ana’s house, a close relative of Papa, smelling the delicious abundance of food that was prepared for us. After a few word from Lindsay and Ron, we lined up and filled our plates with the amazing food. There was chicken, fish, cassava, pumpkin, banana’s brother, rice, dahl soup, taro, and much more for us to try.

When we were full, the girls headed to Papa’s house and the guys went with Tumbi to help crush the kava. To crush the kava, they take the root and put it in an iron bowl and use an iron rod to crush the root. We went around in a circle, passing the rod from person to person to take turns because the rod was so heavy. After the root had been crushed into a fine powder, we took the kava to another house where we joined other villagers in the kava drinking ceremony. A few hours later, we headed back to our host families for a good night’s sleep after such a busy and exciting day. We all loved being immersed in the unique Fijian culture and we made many friends while we were on Beqa. 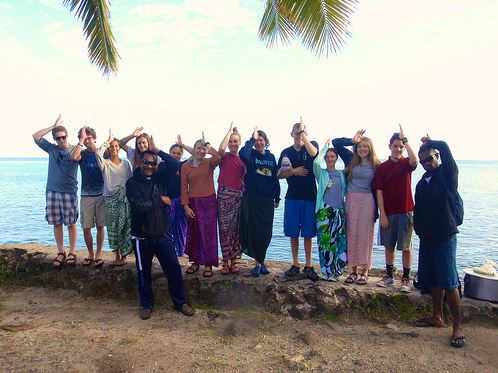