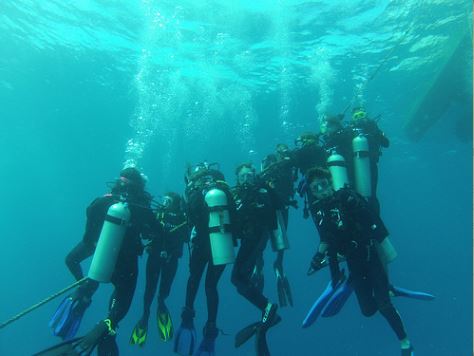 Today’s update from Fiji was co-written by Maddie and Devin:

To start off a new week, we woke up early for breakfast at 7:00 to begin our morning with another shark dive! After taking a break yesterday with a soft coral dive in the crystal clear waters of Fjij, we were eager to swim with the sharks again. We arrived at the dive shop prior to 8:00 to start gearing up. Once on the boat, we arrived at the Shark Reef Marine Reserve (SRMR), finished putting our gear on, and prepared to get in the water. It was rather choppier than the previous days but we managed to jump into the water efficiently (faster than the other boat of tourists, of course). After sinking to 95 feet we made our way to the barrier we normally sit on. The massive Bull sharks we observed seemed a bit ferocious over their food compared to past dives. One Bull shark even managed to devour two tuna heads at once! We viewed a mixture of Bull sharks, Whitetip Reef sharks, Blacktip Reef sharks, and Grey Reef sharks during our dive. Amidst the surface interval, we enjoyed our tea and cookies we discussed all the astonishing things we saw at the bottom of the reef. The surf was increasingly rougher so the captain decided to move inside the reef. Following the second dive, we observed more bull sharks and snapped some amazing photographs. When we got back on the boat, Papa surprised us with a plethora of shark teeth that we handed around. Some embraced Papa with a hug, which was amusing because he wasn’t sure what to do. We also learned quite a few new Fijian words today from Papa and the rest of the crew. First off we learned how to properly count to three (“dua, rua, tolu”), but most importantly we learned that, “wasa wasa,” means ocean. We’re probably going to be using that one often. Today was also the first day we didn’t have a lecture because our midterm is on Wednesday and everybody has begun studying. We had to write our fifth journal first, but afterwards we all began memorizing the scientific names for nine specific sharks. We actually had a lot of fun creating acronyms and memory hooks to remember all the really complicated scientific names. It was really relaxing since we were able to sit in the Fijian sun and work together as a group all afternoon while Lindsay and Austin even cooked baked ziti for us (it was really good)! After an enjoyable, yet exhausting, day we decided to watch a comedy and catch some z’s in preparation for going to Galoa tomorrow morning for community service! Ni sa moce! (See you tomorrow! 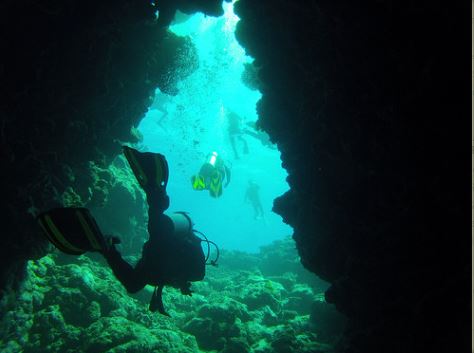