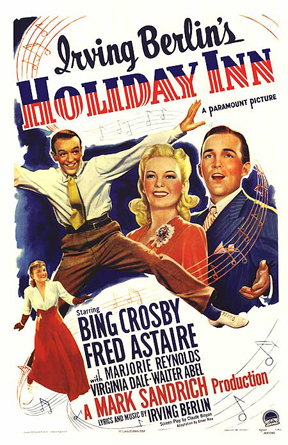 Every year I like to roll out this little bit on American Thanksgiving history. It’s a good reminder that politics in America have always been a messy affair because, well – democracy. It’s not a great system, but it’s better than anything else out there.

From Churchill by Himself, 574:

Thanksgiving is actually a relatively modern holiday – and only an “official” holiday since 1941.

Now, many years ago, while I was watching one of my favorite all-time movies, Holiday Inn (starring Bing Crosby and Fred Astaire, 1942), I was puzzled by a scene in the film in which a November calendar appears on which an animated turkey jumps back and forth between the two weeks, until he gives up and shrugs his shoulders at the audience.

It traces to an interesting policy of Roosevelt’s derisively called “Franksgiving”. There is a great history of Franksgiving on Wikipedia: Link

In keeping with a custom begun by Lincoln in 1863, U.S. Presidents had declared a general day of thanksgiving to be observed on the last Thursday in November. By late October of that year, President Roosevelt decided to deviate from this custom and declare November 23, the second-to-last Thursday, as Thanksgiving that year.

The short-notice change in dates affected the holiday plans of millions of Americans. For example, many college football teams routinely ended their seasons with rivalry games on Thanksgiving, and had scheduled them that year for the last day in November; some athletic conferences had rules permitting games only through the Saturday following Thanksgiving. If the date were changed, many of these teams would play their games for empty stadiums or not at all. The change also caused problems for college registrars, schedulers, and calendar makers. A Gallup poll discovered that Democrats favored the switch 52% to 48% while Republicans opposed it 79% to 21%. Overall, Americans opposed the change 62% to 38%.After announcing August 31, 1939, that he would similarly designate November 21 of the next year, Roosevelt issued on October 31 his official proclamation calling for “a day of general thanksgiving” on November 23. Such declarations amount to using the “moral authority” of the Presidency, and each state government can independently determine when to cancel work for state (and in some cases, municipal) employees. Twenty-three states’ governments and the District of Columbia recognized the non-traditional date, twenty-two states preserved the traditional date on November 30, and the remaining three – Colorado, Mississippi, and Texas – gave holidays in both weeks.

It’s interesting to note that while we like to talk about partisan politics today, it looks like our grandparents weren’t immune either. Note this passage:

The plan encountered immediate opposition. Alf Landon, Roosevelt’s Republican challenger in the preceding election, called the declaration “another illustration of the confusion which [Roosevelt’s] impulsiveness has caused so frequently during his administration. If the change has any merit at all, more time should have been taken working it out… instead of springing it upon an unprepared country with the omnipotence of a Hitler.” While not all critics were political opponents of the president, most parts of New England (then a Republican stronghold relative to the rest of the nation) were among the most vocal areas. James Frasier, the chairman of the selectmen of Plymouth, Massachusetts (the commonly alleged location of the first Thanksgiving holiday) “heartily disapproved”.

Have a good dinner 🙂